Alaskan Huskies
White Trail Adventures has around 75 dogs. The exact number of dogs varies a little every year, due to the number of puppies born and the number of old dogs that pass away. The type of sled dog is called „Alaskan Husky“ and dogs are normally bred within the kennel. Now and then new dogs are bought from other kennels to add some ‘fresh blood’. Alaskan Huskies are known to be very friendly dogs, hard working and with great endurance and speed. They are built for pulling sleds and in the same time eager to work together with people. Due to the fact, that an Alaskan Husky has no proper breeding standards, they vary a lot in size and looks. Some are more alike the pure breed polar dogs (Sibirian Husky, Greenland Dog, Alaskan Malamute), with a thick under coat, some have less under coat and are more alike a hunting dog, like pointers. None the less, all of them are born and bred to run in front of a sled and do this with joy.

Working life of the dogs
The dogs start working on tours when they are around one and a half years old and the first working season, they will only run with experienced drivers. Depending on the individual physical state of the dog, the majority of them is running until they are 11-13 years old. Due to the different types of tours WTA is offering and a documented working schedule for dogs, it is made sure that dogs participate in the tours they are able to do and in the same time have the necessary rest between different tours. Retired dogs stay on the yard as long as they are happy and able to have a dog-worth life. A health insurance for them makes sure, that also more expensive treatments at the veterinarian are affordable for WTA. 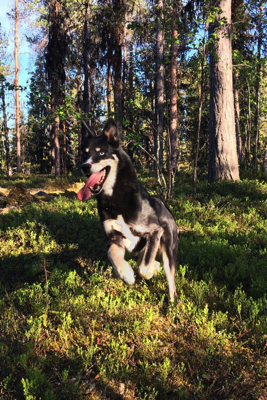 Training
The annual training of the dogs we can divide into three kind of training - puppy-training, autumntraining and leader-training:

During puppy-training the puppies first socialise with humans and other dogs, they learn their name and go for short walks. On these walks, they first run free, to learn to stay around humans and to come back when called. Later on, they are getting accustomed with a collar and the leash and one step further with the harness. When they are 8 – 12 months old, depending on the time of the year, they will start training in front of the sled, in a team of experienced dogs. Afterwards, when they are between 10-12 months old and of course always taking into account the individual development, they will start to run on WTA´s shorter tours.

According to higher temperatures during the summer months, it is not possible to train the dogs in front of a sled or a quadbike. The risk for overheating a dog is just to high and the only exercise they have is running loose in the freerun areas. In autumn, normally around end of August, when the temperatures are below 12 degrees C, the physical training for all dogs starts again. Before the first snow comes, the dogs are running in front of a quad-bike. Distances start with 5km per run and will increase during the training. First they build up strength during the quadbike training and later, in front of the sled, the necessary speed develops. All this in order to prepare them well for their job during winter time. In total they run approximately 400 km during training, before the season starts.

Most of the time at the end of the season, but also during the season, promising young dogs will go into leader-training. These leaders are important, as they are working together with the guide, to lead the group or team in a certain direction. When working together with an educated leader dog, all communication is done simply verbal. Newbee leader dogs, normal first work together with an experienced dog, later on they are put in own responsibility. First steps are responding at the crossings on the trails. The advanced state is then to respond in areas with no trails or no visible trails, too.

During the “running season“, between September and April, dogs of around 2 to 9 years old, run around 3000km. Older or younger dogs run on tours, too, but they do a lot less kilometres. The choice of dogs for the tours will be made considering the type of tour, the age and fitness of the dog and the amount of days they have been running before.

What do the dogs do off season?
In summer the dogs get a well-deserved rest. Although they enjoy winters work, they also enjoy their leisure time. Socialising with other dogs in the freerun, paying with them, just sniffing and digging – all of them important activities in a doglife and important for their social behaviour with other dogs. Young dogs can be introduced to the group in the free-run, as well as dogs that come from other kennels. When not running loose, the dogs normally live together in pairs in their kennels. This to insure, that they have the necessary social contact they need, but also to avoid, that, in case of a dogfight, several dogs could pick on one can cause severe injuries or even death to this individual. Besides of letting the dogs out into the freerun areas, the daily care also includes the feeding and the cleaning of the kennels.

Food
Due to the high amount of energy the dogs need in wintertime and during the autumn training, they are fed with a mix of meat, dry food and water. Water is mixed into the food, as it is not possible to provide a constant access to drinking water in minus temperatures. During summer, the dogs have access to fresh water all day round and are only fed with dry food. Dogs with allergies or old dogs get special food, matching their condition and needs. Every now and then, they get bones, partly as entertainment, but also to „brush their teeth“.

Sponsoring our dogs
We have the possibility for you to sponsor our dogs. With this sponsorship you will contribute to our philosophy of giving the dogs the best possible life they can have, while working as a sleddog. You can read more about the different sponsorship on the page Sponsoring our dogs 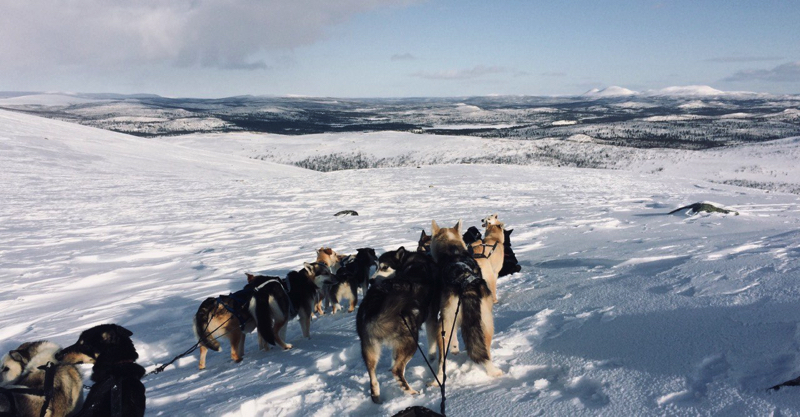