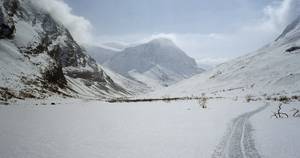 In the Lapland region in the far north of Sweden, you can find the most vast, dramatic and spectacular untamed wilderness areas that Europe has to offer. Much of this magnificent natural treasure is within easy access of visitors from around the world, who come to Lapland, Sweden to experience the peace, tranquility, grandeur, poetry and drama of the Arctic landscape. Other areas of the Lapland wilderness can only be reached by experienced hikers and adventurers.

The origins of the name Lapland is to be found in the Swedish term Lappmarken ("the Sámi lands"), referring to the territories of the north settled by the Sámi people. From this evolved the province (landskap) Lappland which in 1809 was split into one part that remained Swedish and one part falling under Finland. To this day, Lapland is split into two entities - one Finnish, one Swedish. The Finnish Lapland region contains both parts of the old Lapland province and the old Ostrobothnian province.

Most international visitors arrive in Lapland through the town of Kiruna, a 1.5 hour flight from Stockholm. From there they can venture out to major Lapland mountain resorts such Abisko, Björkliden and Riksgränsen, and to the massif around Kebnekaise, Sweden´s highest mountain,  another centre for hikers and adventurers. White Trail Adventures is located about half way between Kiruna and Jukkasjärvi  the location of the world famous Icehotel, with a wide variety of events and activities for visitors throughout the winter season. Lapland is also home to the Sami people, the native Scandinavians. The Lapland towns of Kiruna and are centres for those interested in traditional Sami culture.